I look back on my years at Schola Regia mostly with warmth. Although it purported to be a lot more as a whole than in fact the individuals (teachers I mean) were taken on their own, in my opinion anyway. I was 70-75 so was taught by Paddy Ashton, Rab Alexander (up the jags!) Sandy Malkin, Bill Lornie, Dougal Cantlay, Badger, Jimmy Dignan, Von Gripe, (sorry can’t remember his proper name), Sam Leitch, Mr Forsyth, Mr Dingwall, Gaudin, Arty Mac, Richard Green, Mr Mitchell (Gym and Geog), and others

I read “Through Rose Tinted Specs” and it seems that the Badger explanation wasn’t right, the writer thinking he got it as he bore a resemblance to a badger. We also found out that getting him on the topic of Rugby helped to minimise our exposure to triremes, battles and the greek alphabet. Not only this subject but the other was his HI FI. You got diagrams on the board! Strange I should end up in the very same industry! But the nickname! He told us himself that it started as Bad Dewar and in time eased into badger. I read recently that he has attended every Edinburgh Music festival from the start. He was actually very kindly certainly compared to his colleague Fred Scott!

I recall Fred Scott nearly eviscerating Ped Macquarie one day. He wasn’t our teacher but Badger was diverted away from the class and our volume level had gone up a bit. Fred strode in and we all rose with a collective gasp of omigod it’s Fred! Ped was next to me as Fred yelled right in his face. My son is now a teacher and tells me his mark is set by selecting the ‘baddest’ boy in the class and making an example like this. ( who was it that used to embed threepenny bits into his desk with his belt or am I getting confused with one of my wife’s schooltales of Currie High?

None of them could belt really unlike that tale of Mr Snow. I recall one French teacher hitting himself when one of my classmates ‘opened his hands while being belted! Crawford was 6 feet and big early on so did not take any nonsense.

I was there also when one of the ‘bad’ boys sold a ‘drugs in the playground’ story to the Daily Record or one of the tabloids. This was on the front page. Can’t say I knew of any real basis for it but it was at the right sort of time.

Songs on the Buses

The other funny thing was being on the number 29 (or 41) bus as it went through Stockbridge. Apart from the driver threatening to call the drug squad after someone set off some incense a top deck full of School sang all the names of the shops as the bus made it’s way down the High Street, towards the end of the song I remember Boots the Chemist getting three mentions ‘Boots!, Boots!, Boots! . Harris and Blackwood are names that come to mind here. This was hilarious and often had onlookers in stitches as well.

Then there was Grunter AKA Graham Hunter who was the leader of the feared Edinburgh Bar-OX (gang from Oxgangs). he must have eventually been expelled at least for wearing jeans instead of regulation trousers or any other number of antics. I think he did help though when the Clermiston gang came up the road to meet the School one afternoon and got chased away for their efforts. Not too much later they were school mates when it went comprehensive.

Oh and the old doors lead out into the teachers car park. I missed leaving that way too, in fact I was a postal resigner in the end.

I went to the Royal High School from 1976- 1980, and like many from Clermiston loved the school, but the school didn’t love us, or for that matter want us. There was no passing through that famous old door, when I left it was over the fence and goodbye.

Even entry to the school from Clermiston was made as difficult as possible, no gate , just climb the wall, some of the teachers during my time, were from a prehistoric age of school fees and elitism, they had a preconception of the pupils from Clermiston, they didn’t want change and never hid the their resentment.

So though I had such a good time at school, it wasn’t down to the dinosaurs like, Mr Murray, Miss Garvie, Mr Mitchell, Miss Urhquart, or Mr Simmons.

To this day myself, and many of the people I went to school with , that were from Clermiston, have never been to RHS FPs dinner dance or club, is this simply because we haven’t joined “the club” or because we came from Clermiston.

I assume the Doctor Murray who writes so entertainingly on our next page about the musical forays into Europe cannot possibly be the same person as Mr Murray described as a dinosaur above. I should also point out that at least three out of the four above aforementioned dinosaurs were not at the school (as far as I can recall) in my time when it was fee paying and allegedly selective. (I left in 1969). Will – Webmaster 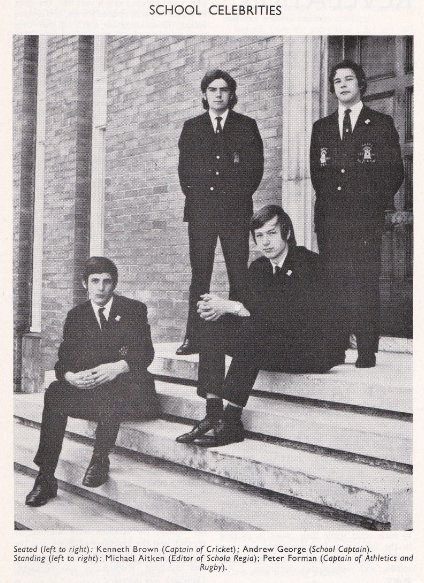 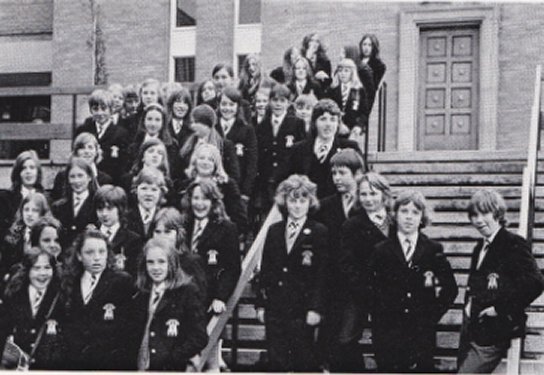 Badger comes from Bad Dewar not badger like appearance. 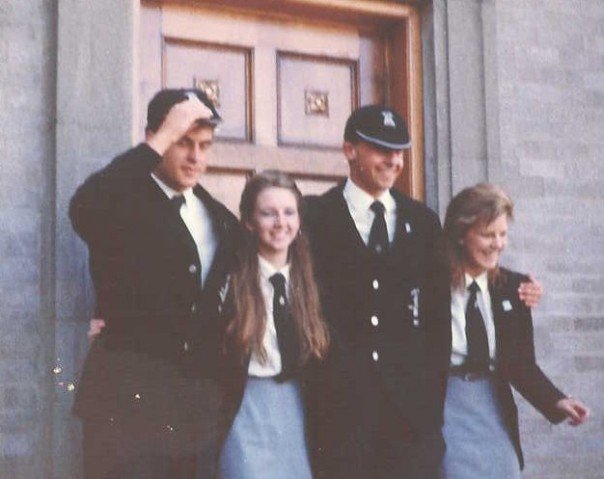 ..the old doors lead out into the teachers car park