Women, or more politely, lady teachers were often just “Ma”, except for the Fifi. She earned her name from Fifi de la Bon Bon a stalwart of the radio show “Much Binding”. Social historians may like to note that this comedy set in a remote RAF station was originally broadcast as “Much Binding in the Marsh” in 1947 and vanished from the airwaves half a century ago. My recollection of her class is of a lady who tolerated no nonsense and seemed to maintain order by force of personality. Several years after I had left the School, I saw her one Sunday night as the Edinburgh Film Guild vacated the old Caley Cinema in Lothian Road and I wondered how such a tiny woman could have terrorised so many healthy young men.

Some others that I recall from the late Forties (my time at the School) are Hoppy Innes (Science), Igor, Bobo, Daddy Penguin and Peanob – the latter a master with a particularly shiny bald pate. Daddy Penguin as a label may have been limited to my Form only; he was only there for a year and I can’t recall ever hearing anyone else refer to him thus, if at all.

One seeming near-geriatric who must have been pushing at least fifty rejoiced (or would have, had he known) in the sobriquet of “Daddy”. He had an unfortunate habit of saying “Heah” and “Theah” for “here” and “there”. As he taught Geography and pointed to a wall map frequently, this was both a diversion and a source of innocent merriment to the class. I believe that he was clocked at something like 26 “Heah”s and 17 “Theah”s in one forty-minute period. Regrettably, in those days, none of us had the nous to organise a sweep. Innocent days! Well, nearly.

Mr.Scott was nicknamed ‘Penob’ when he took a group of boys to New England just prior to WWII—from Penobscot, a town on their tour. 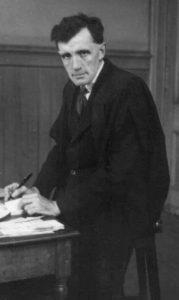 Latin Master "Fred" Scott. He may or may not be the same master known as "Penob " Scott.